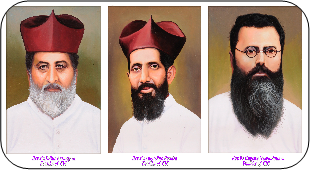 “If you would build high you must remain low”.

Helping Hand For a Hopeful Priest

The Catholics of Panjampatti belonged to the Vanniyar Community had been a major force in number in the social structure of Tamil Nadu. The Village of Panjampatti was considered to be a fort of Vanniyar Catholics who were believed to be descendants of the Raiputs of the South! These hard-working people were not only tillers but also toilers. Though these innocent and uneducated people were Catholics by name, their faith was not really deep-rooted. The out-dated policies and practices of some Goan priests,who were incharge of the parish were the main reasons for the spiritual coldness and backwardness of Panjampatti parishioners.

A fresh gust of spiritual faith and religious enthusiasm blew throughout Panjampatti on the arrival of Fr. Larmey. Though the Almighty has chosen Fr. Larmey for a very difficult task he never left him to suffer in loneliness. “No one is helpless whose hope is in God.” Fr. Larmey had always placed his hope with God, so he was hopeful of having his difficulties solved. When he was searching for the seed that was going to grow into a very big tree with large branches on all sides, a helping hand stretched out at Panjampatti. He was Augustine Pereira, a lad of 21 at that time of his arrival at Panjampatti in 1876.

A pearl from Tuticorin

At this period Tuticorin was hitting the headlines of dailies very frequently. Very recently a separate revenue district has been bifurcated from Tirunelveli district and the same has been named after the famous freedom fighter cum navigator V.O. Chidambaranar with Tuticorin as district headquarters. Tuticorin harbor was going to be developed in a very big scale and was expected to be the largest in Asia. The very name SPIC has elevated the popularity of Tuticorin skylight! It had also occupied a prime place in the Indian freedom struggle. In the history of Indian Catholic Chruch also Tuticorin had very long back played a key-role. Eminent priests including Robert de Nobili, (Thathuva Pothakar, the Father of Tamil prose) who was instrumental for the formation of Madurai mission, learnt Tamil and pastoral work in Tuticorin and nearby coastal places.

Augustine Pereira was born in this traditional Catholic town of Tuticorin in 1854. The seed of the spiritual zeal sown by his mother grew steadily and firmly. Though his father Ignatius Pereira had persuaded him to take up business and sent him to Colombo to give him training, the fire of devotion and piety was burning in the heart of Augustine. The acquaintance of Fr. Larmey and the affection showered by him on Augustine made the fire in him more flaming. When Fr. Larmey was transferred from Tuticorin to Nagapatttinam, Augustine accompanied him and they were general perfect and assistant prefect of St. Joseph’s College Boarding respectively. In 1875when Fr. Larmey was installed as the Parish Priest of Panjampatti, Augustine followed him as his shadow.