According to the commandment of Jesus, CIC set its feet in Sri Lanka, on 2nd July 2004, as the 137th convent of the Congregation. The Sisters Sr. Regi Sadanadam, Sr. Theoni and Sr. Michael came boldly and generously to render service to the people who were lifeless, broken hearted because of the continuous death, and the loss of everything which accrued, due to the terrific impact of the war.

It became the significant day because of the 150th Birthday of the Founder, Fr. Augustine Pereira who sacrificed himself by renouncing the richness of Colombo and offered himself for the betterment of the people of Panjampatti, a remote village; he had not even transport facilities!

The ministries at Vidathel Island

Those who lived in Vedathel Island were Catholics. The migration, no sign of permanency, fear, stress due to disaster, disfigured them. The other denomination Christians took this opportunity of using this testing time of the faith of the people and intruded into their camp and distorted them. The primary ministry of bringing back those people to the Catholic faith was put before the CIC. It reminded the Sisters of the word of God “I came into the world to redeem that which was lost”

One of the results of war is the fall of the standard of education and also the lack of any atmosphere of learning. Small families are left behind; the pathetic situation was not knowing the where-abouts of their children.

In 22 centres, Sisters without guarantee for their life, boldly travelled to these places and took evening classes. 1587 persons were benefited by their effort.

This ministry is focused more upon strengthening the people, especially those who lost their faith and help them to put their trust upon God. As the first Beates Group, Sisters walked into each village, street and to the house, with full strength to console the people, those who were filled with sorrow. With mercy and compassion they were one with the people and fulfilled their need and gave life to them. Obedient to the following  commandments of Jesus “Go therefore, and make disciples for all Nations” (Mth. 28: 19) the Sisters formed the volunteer group for evangelization. By doing the traditional ministry of the Congregation, Sisters witnessed to their own life.

For the people, those who had been broken in their body and mind due to Nsunami and war, the Sisters conducted awareness classes in facts of life and psychology. On 08.12.2004 “Amali children Home” was started and made a conducive atmosphere for continuing their education. These are all done through the financial support of the JRS. The  extension of the ministry was felt important in Vazhkaipetran Kandal and Vedathel Island. So in Vazhkaipetran Kandal in 28/03/2005 a convent was opened to do the ministry even in the sub parishes. In the year 2007 since the war became worse the convent in Vedathel Island was closed. Though it was closed there, the ministries in the places are continuing in the same spirit. Taking catechism classes, conducting Small Christian Community meeting and sharing sessions, visiting houses are going on without fail. 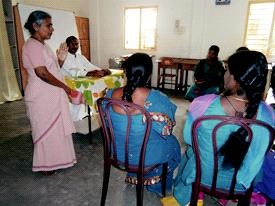 In 01.05.2005 the third convent was started and made history by signification in the district of Mannar through the great work of uplifting t h e l i f e o f t h e s c a v e n g e r s (Arunthathiyar). The scavengers, those who lived without having any expectation about their future, stayed upon the garbage. Through the awareness programme, the Sisters, uplifted their human dignity, and helped them to live in proper houses. For this effort JRS and other NGOs came forward to assist.

Ministry in the time of war

Sri Lanka, which was like a beautiful pearl with natural Green Islands in the Indian Ocean because of shedding of blood due to the war became disfigured. It was a time of terror with armed forces around walking with guns, the paten tanks with bombs, and Nsunami which made the life of the people into darkness. It was an atmosphere of sorrow, uncertainty about the future.It was the days of fear, confusion and journeys without safety. Everywhere fearful threats of killing, doubtfulness, if they go for fishing there was authoritarian threats from the Sea Force and the Tigers. So there was no safety anywhere. In those situations bearing the following words of Jesus in mind “Fear not, I am with you till the end of the world” with full faith the courageous CIC Sisters sacrificed themselves and entered into the life -giving ministry.

Their ministry during the critical situation of war

They concentrated much upon the people’s spiritual and all round development by making much effort to eradicate the drinking and gambling in society. Through JRS their ministry reached even to the interior villages.

Through the life uplifting Centres they conducted evening classes. In the government schools they taught English voluntarily. They taught in the nursery schools, gave training in counseling and also counseled the individuals. By adapting the marginalized villages they w e r e i n v o l v e d i n t h e i n t e g r a t e d d e v e l o p m e n t programmes. For the people, those who came back to their villages, and sub parishes they d i d t h e s o c i a l a n d evangelization ministry. Through the government and NGO’s they conducted the awareness seminars. They conducted the small Christian community meetings, visited the houses, gave counseling and strengthened their faith.

They conducted the retreats, formed children’s fellowship groups and prepared them for the Sacraments. By developmental ministry they helped the local refugees of the island. Since the war intensified the junior Sisters were called back to India and the number of Sisters was reduced to four.

Ministry after the war

It was the time when a number of people suffered wounds during and after the fighting. It was the time people were enslaved and disfigured inside the camp and inside the barbed wire. It was the time of tremendous loss, loss of legs and hands, loss of the whole family, not knowing the whereabouts of wife for the husband, children to the parents. On the whole it was the time of undergoing painful experience for the Tamil Sri Lankan people. The Ministry of CIC during this time was in hospitals where the affected were taken care of. Since the numbers of patients increased, the Sisters through social counseling ministries, by spending more time with them, and finding assistance from the government, Caritas, and assisting in cooking in the kitchen surrendered themselves for the redemption of the people. According to the signs of the times they offered themselves in various ministries.

From the depth of heart 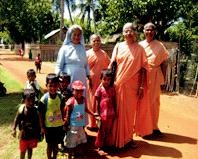 “You have covered my head in the day of war” (Ps.140:7b). This word of God is true in the life of the CIC Sisters. The strength of God was with the Sisters and guided them. If this plan or this work is of men, it will come to nothing. But if it is of God, you cannot over – throw it, lest you even be found to fight

against God.”(Act.5: 38 – 39) as this word of God was expressed by the present Superior General Sr. Antony Xavier when she was with them as a missionary in Sri Lanka,         to   the    missionary Sisters, the ministry is growing according to the plan of God. The   Sisters    also    thank   the previous  Superior  General  Sr.Agnes Xavier who encouraged the   effort    of    starting     the formation in the same soil of Sri Lanka.